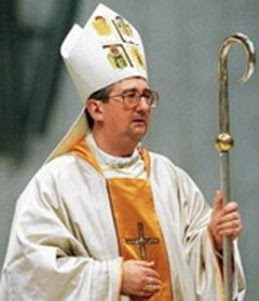 Mindlessly channel surfing over the weekend, I stumbled onto Sky News who were broadcasting a piece of footage, possibly from the porch of the Pro Cathdral in Dublin, where clerical abuse survivor, Christine Buckley was very calmly addressing Archbishop Diarmuid Martin.

Christine is a normal looking, middle aged woman . She did not dress up particularly for this ‘informal’ meeting which looked like it took place after Mass. She spoke in a calm, rational and measured way of how the Pope’s Letter to the People of Ireland on the subject of the abuse of children by Priests, was inadequate.

In contrast, Archbishop Martin, stood in front of her, garbed in his full regalia of expensive robes, holding a golden crozier and his mitre perched jauntily on his head. He was listening intently to this brave woman.

What struck me was just how ridiculous he looked in his fine garb. His face showed concern and compassion as he clearly struggles with trying to do the ‘right’ thing, with what seems like little useful help from ‘Head Office’. But his expression was in complete contrast with the ostentatious and pretentious gear of the Catholic hierarchy.

As I witness this crisis unfold, in what used to be my church, I am struck at just how far from the path of Jesus these men have strayed. I am hoping that the sacrifice that all those thousands of raped and abused children have made, will result in a total meltdown of the Catholic church. I am hoping that perhaps these innocent children, who Jesus loved most, will serve to make the church realise that their flamboyant belief in their own importance along with the flashy wealth of the church is not something that Jesus would tolerate for a minute if he were to return to Earth now. Perhaps those who were abused as children will serve to bring that message to the church now. I salute their bravery and courage.