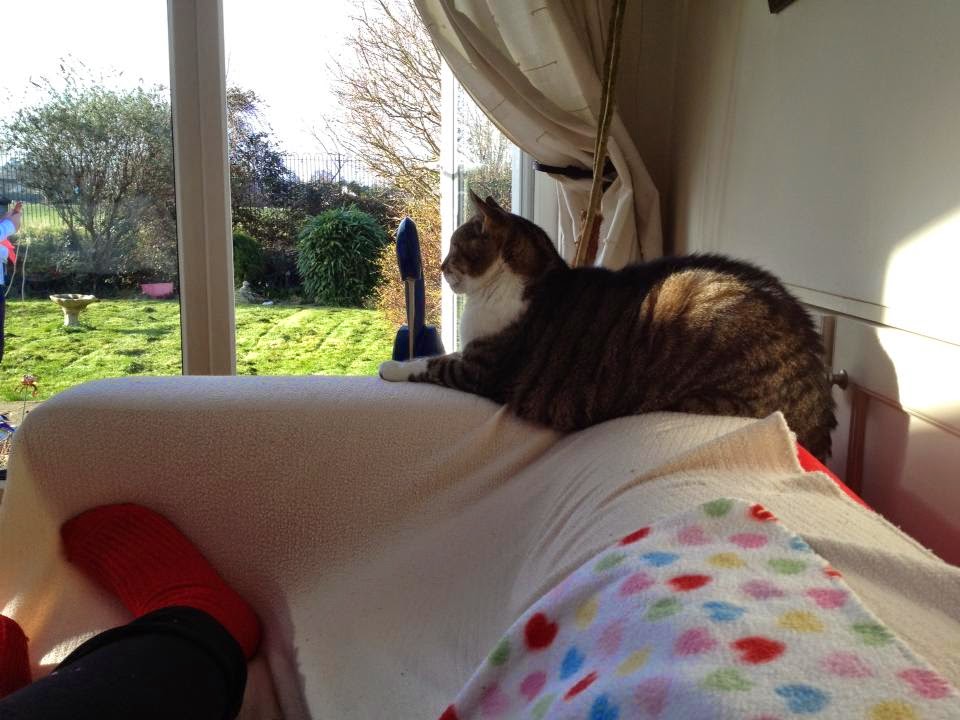 16 years is a long time to live with someone regardless of how many legs they have.  In our house we live with as many four leggeds as with two leggeds and the bonds of love are strong.

This week our oldest four legged – Simba died.  He had been in decline for months but my philosophy for elderly animals is that as long as they are enjoying life I would prefer them to fade slowly away.  I am not inclined to interfere with nature’s natural leisurely journey towards the end unless there is pain or discomfort involved.  Simba had lost weight and also his hearing but he was happy and still enjoying life right until the last day or so. 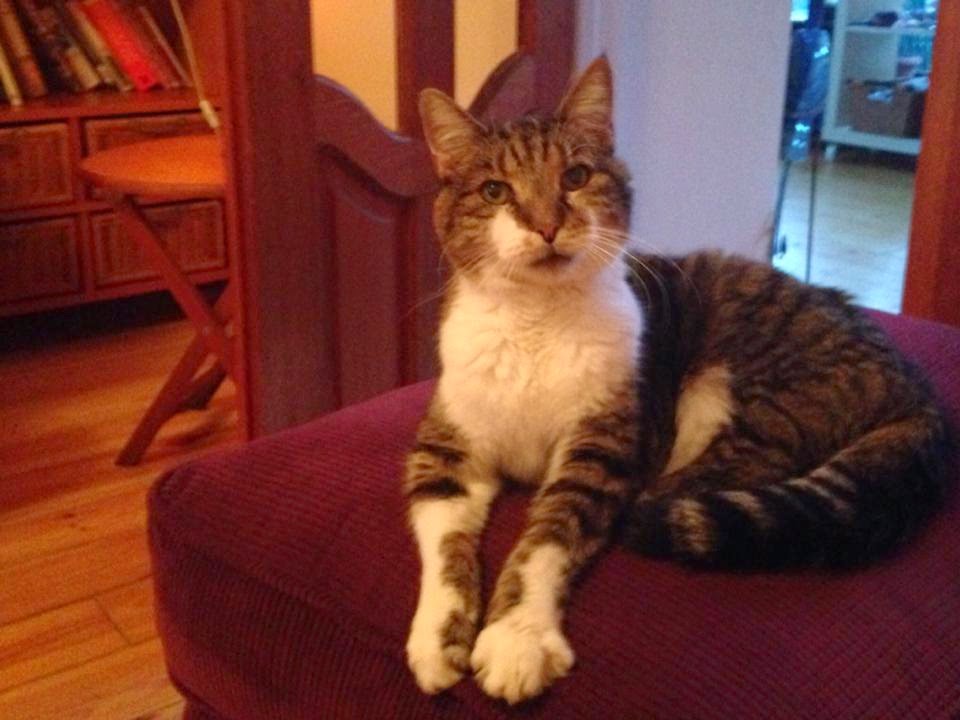 It was Carla, our eldest who brought Simba home to our first house in Shankill when she was about 11 years old.  She found him in some old woman’s shed where a cat had just had kittens and the old woman said she could keep him.  He was probably a bit too young to have been taken from his mother but I had a baby myself and probably wasn’t fully paying attention and so Simba stayed. 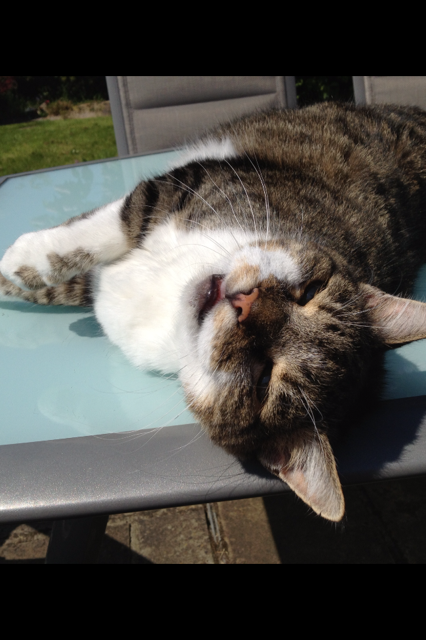 He was cute like all kittens are and very playful.  But as he got older we discovered a dark quirk to his large rambunctious personality.  He wasn’t that keen on children or older people.  It began when he took a swipe at some of the cousins, all of whom were very young.  He missed but we realised that if young visitors came to the house we would have to lock Simba into a room for their safety.

This was also a problem when we hosted parties for the girls, with lots of kids running about the house Simba was invariably released from his captivity.  So with the next party on the horizon I decided to visit the vet and investigate how best to deal with his behavioural quirk.  The vet advised some behavioural realignment using cat valium.  Yes, I kid you not.  I came away with a month’s supply of cat valium which would hopefully teach Simba to chill and not attack children.

The problem with the cat valium was that they were tiny tablets and the vet told me administer one quarter of a tablet per day.  So for three days I attempted to quarter a tiny tablet which resulted in bits of cat valium bits about my kitchen.  Not ideal when I now had two small children who spent a lot of time crawling about on the floor.  So I gave up.  Instead I decided that I would administer a tablet on the day of the party to keep him calm and the visiting children safe.

Simba was a pig when it came to food so it was no problem to get him to take the tablet.  I will never forget the faces of the parents who dropped their little darlings off, when they spied a huge fat cat comatose on the back of an armchair with his mouth open and tongue hanging out.  He was happily out of his head for hours... and no one got hurt at the party.  The supply of cat valium lasted through the parties at home stage and Simba had no recollection of any of them.

Simba grew up into a huge, lazy, vocal, affectionate cat who loved being around us and in the house.  In winter no one got as excited as he did on a cold evening when we lit the fire.  He would be in, staking his place in front of the hearth at the first sound of coal being rattled.

He grew and grew so much that I got tired of visitors asking when ‘she’ was due to give birth.  Then someone arrived one day who looked at me as if I were really thick.  “That cat has a tumour or something” he said.  “I’ve never seen a cat that size.  Have you taken him to the vet?”  “No”, I said sheepishly.

Next day, full of guilt I took Simba to the vet.   “What’s the problem” he said.  I recounted the story of the man who said he must have a tumour.  The vet examined Simba and then asked me two questions. 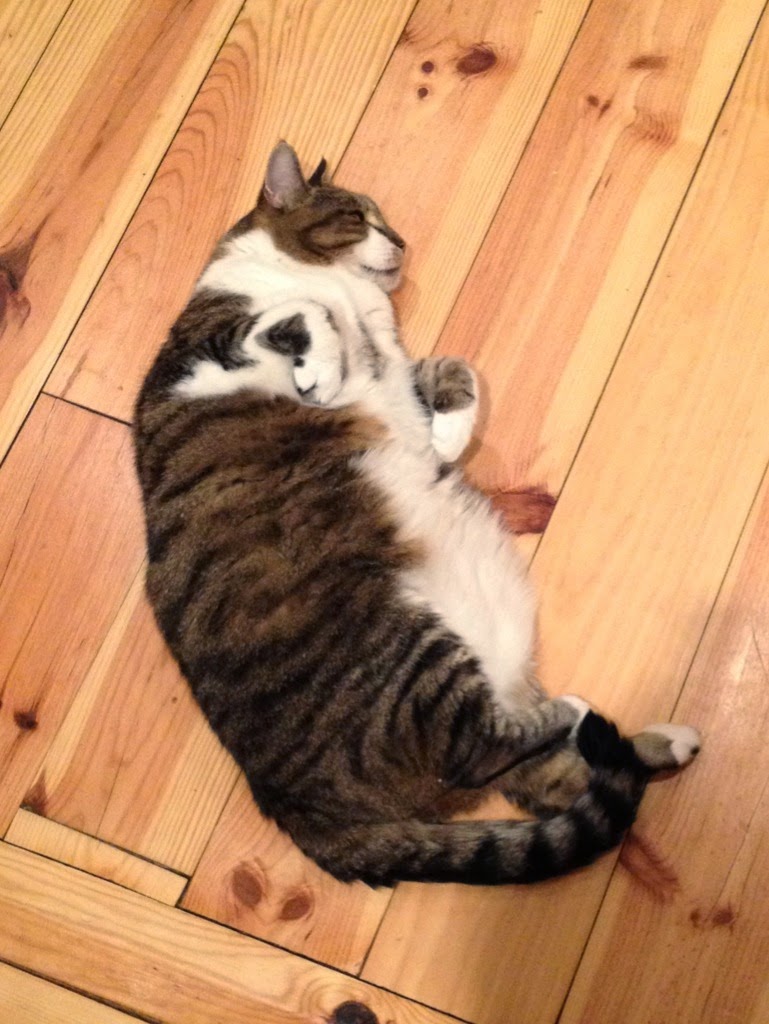 He was a constant in our house for the last 16 years.  He loved dinner time – watching me as I prepared food in the hope that I would drop a tasty morsel for him.  He would then join us at the table – sitting on a free chair preferably at the head of the table from where he would listen to our conversations and wonder what our food tasted like.

He thumped down off beds and down the stairs in the manner of a large child.  He talked a lot and was the only cat who always answered us when we greeted him.

Although he had issues with some two leggeds he loved other cats.  We have fostered many kittens and older cats for the DSPCA and Simba never objected to a new arrival.  In fact without Simba we would have struggled to win around some of our very nervous fosters.  It was Simba who would give them the confidence to come out of hiding and feel safe in the world.  His greatest achievement in this regard was the rehabilitation of Oprah, the feral kitten who came to us at Christmas.

Simba was the last of our first generation of cats.  In hindsight we should have staggered our cat adoptions a bit better.  Like the way most of our white goods blew up in year seven of our marriage, over the last 18 months or so I have held the paws of four beloved cats as they left this world.

Simba knew the end was near and took himself off to die at the end of the garden. Unfortunately he (we assume) took a tumble into a little inaccessible stream at the end of our garden and it took us some hours to locate him.  In the end it was Mia (13) who found him and she had to come back to get help to reach him.  While she did that, another of our cats, Diego took up position beside the dying Simba until Paul arrived with a ladder and took poor Simba home.

He was weak and his body was shutting down so bundling him into a soft blanket we took him to the emergency veterinary hospital in UCD where they agreed that we should help him on his journey.  So he died as he lived – mainly peacefully with a bit of drama.

We took him home with us and on Wednesday evening in a soft rain, as the light drained from the sky, Paul dug a grave for our beloved boy and we lay him to sleep by the lilac tree in the garden.  Diego watched from the wall.

We now have four young cats – the oldest is about 2 and so I guess in another 15 years or so I will once again be shedding salty tears as they take their leave.  It’s always sad and you never get used to it.  But it is a tribute to the animals any of us chose to live with, that they connect with us in a deep and meaningful way, that they colour every day of the life we live together and that they become true members of the family.

Simba will live on in our hearts and the stories of his life will be told for years to come.  He was some cat! 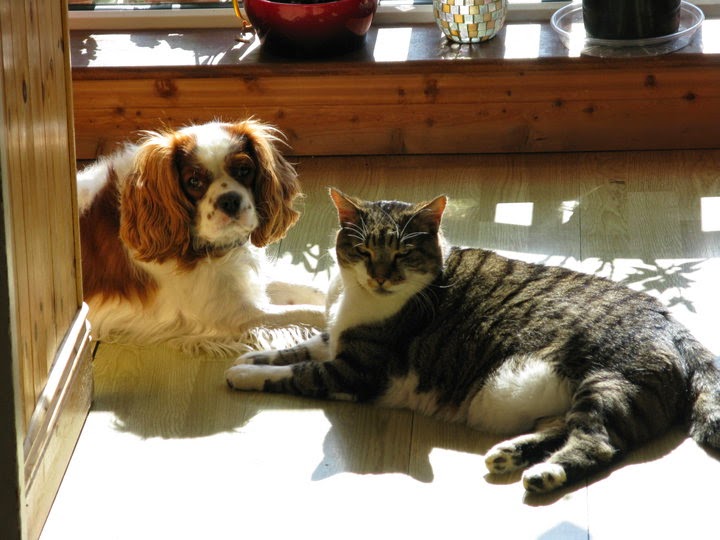 Posted by Barbara Scully at 1:01 PM