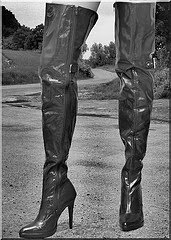 Christmas and the New Year are always a time of over indulgence. Too much rich food and alcohol means that I, like many, staggered into 2010 feeling like a poisoned pup. But thanks to Mother’s Nature’s winter wonderland, instead of staggering out for long, brisk walks with Dylan, I merely staggered to the nearest sofa, clutching handfuls of peanuts or chocolate roses in one hand and the TV remote in the other. Last night I contemplated my shape which is fast beginning to resemble the snowman the girls built in the garden – only taller!

And so, like thousands of women, I am embarking on a phase of increased exercise and healthy eating (I hate the word diet – but you get the picture). Hunger pangs stalk my waking moments and in an effort to combat them I turn to day dreaming about the various items of clothing that languish in my wardrobe waiting for the day I might fit into them again. Sometimes these daydreams get very exciting and involve shopping trips during which I purchase things like high heeled, thigh high boots, mini skirts and all manner of sex kitten clobber. Then I come back to earth when I remember that I have never been a sex kitten – even in my teenage years. The fact that I was head and shoulders taller than all my friends, ruled out high heels and my legs ruled out short skirts.

God gave me the long legs but he got the width measurement all wrong – surprisingly. And so in my youth, my legs were at least two sizes too big for the rest of me. To compound his error, God also gifted me with two knees on each leg. Of course I still have big, lumpy knees – only now they match the rest of me!

But my long legs have caused me fashion headaches for as long as I can remember. As a child, I had to wear tights to school in the winter and I don’t think I ever owned a pair that fitted me. I pulled them on and up and things seemed fine, until I began to walk. And so I developed a winter walking style all my own – which involved two normal strides and one giant one as I attempted to subtly manoeuvre the crotch back to where it belonged. It was a losing battle and as I arrived at school my tights had travelled south towards my knees where they thankfully got stuck, saving me any obvious embarrassment, other than the wrinkled gathering of spare tight at each ankle!

As a young adult, in the early 80’s, I was often told “you are so lucky, being tall, you could wear anything”. I heard this so much that I began to believe it. So in a rush of enthusiasm off I went to purchase the seasons must have – a satin jumpsuit. It was purple and I thought very sophisticated in a Challenge Anneka kind of way (Anneka Rice - do not post a comment asking who she is - ask your mother). I decided that a formal Gala Dinner (big in corporate Ireland in the 80’s) would be the perfect occasion to christen my new outfit. Big permed hair, silver blusher, glitter eye shadow and my purple satin jumpsuit and off I went, delighted with myself. But not long into the evening I began to realise I was having problems standing up straight. If I did, the neck at the back of my suit was pulled downwards with the resultant pulling northwards of the front. Again my crotch was a feature of this wardrobe malfunction and visions of camel’s feet also come to mind. I did little dancing that night.

Fast forward to about ten years ago. Having recently given birth to my third child, I had abandoned any thoughts of getting my girly figure, albeit with all its shortcomings, back again. I needed some help and who should come along with just what I needed but those two witches, Trinny and Susannah and their magic knickers. Magic knickers were guaranteed to lift your bum, hold in your tum and were designed to stretch up all the way to just under your boobs. I couldn’t wait to get my hands on a pair. I know I paid a fortune for mine which were purchased in a proper lingerie shop.

It was Christmas and me and him were meeting some friends for a posh dinner. I excitedly pulled on my magic knickers and my new festive outfit and took a look in the mirror. Definite improvement – a lot of the lumps and bumps had magically vanished. God Bless Trinny and Susannah and off we went. It was as we were walking into the restaurant, waving at our friends that I had the very disconcerting feeling of my magic knickers magically rolling themselves back up as though their job was done. Just like my school tights I think that my magic drawers were designed for shorter women. And so I spent an uncomfortable night looking lumpier than ever as my own excess poundage came up for air, joined by a redundant roll of expensive undergarment.

So I am not under any illusions in reality about shaping myself into the me of my dreams, six feet tall with long, sexy legs and a figure to die for. Just a bit less like snow-woman would be good. Wish me luck!
Photo by Markusram on Flickr.com
Posted by Barbara Scully at 11:50 AM