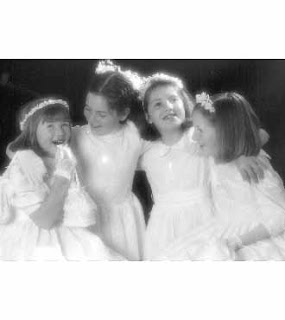 ‘Have you anyone for communion this year’ is a question that is surely echoing around the school gates about now, as mothers (and some fathers) compare notes and put the finishing touches to plans for The Big Day in May. Each time I hear the question, my heart soars as I remember again that my days of Communions Madness are now over! Halleluiah.

Phase One is the family party. After the cuppa and buns in the church hall or school, the extended family and perhaps Godparents retire to the Communicant’s home for lunch. In the days of the Celtic Tiger this was often catered, or sometimes held in a local Golf Club, Yacht Club or restaurant. Nowadays the party at home is probably more likely catered by the lucky mammy of the Communion Boy or Girl. Phase One should also include entertainment for the youngsters; the popular option being a bouncing castle which always requires a leap of faith in the Irish weather that puts what the children have been through in the church to shame!

Once the family have been fed and watered sufficiently, some will leave just ahead of Phase Two of the Communion Do. Phase Two is when the neighbours and friends arrive to celebrate the child’s special day. A second wave of food will be provided and the drink restocked. These parties have been known to go to the wee hours of the following day.

I am genuinely in awe of mammies who can achieve all this in one 24 hours. Personally, being well versed in my own shortcomings I know such a gig is way beyond what I could ever hope to achieve. For me, getting myself and my children to the church on time and looking reasonably well turned out is about the height of it. I am a small bit embarrassed by the fact that for our daughter’s Communion, we all piled into the car after the church and left town. We decamped to the country hotel where we had lunch and by 6pm, just as we should have been beginning phase two, we were in the swimming pool! Selfish? Perhaps but I suppose I have a highly developed sense of self preservation as opposed to perseverance.
And after our swim we sat down to dinner and I regaled my girls with the story of how communions were done in the 70’s. A quick call (on your own) to a couple of neighbours to collect a few coins in your bag and then it was off to Dublin Zoo where along with viewing the animals, you also viewed all the other little girls in their white dresses. The Zoo was a lot more compact then and so there were no long walks over sandy savannah. On concrete footpaths our finery was unsullied by dust and our minds unburdened by the knowledge that a lot of the animals were more than a little ‘disturbed’ by their small enclosures. The highlight of the afternoon was an ice cream stop in the little café overlooking the flamingos. And we were delighted. Heady days indeed. So ‘anyone for Communion in your house this year?’
One of the nicest 'concepts' taught to children nowadays for Communion is that of connectedness. My youngest daughters both sang a lovely hymn at their Communions, called 'Connected'. Long before this was introduced formally, back in 1996, Paul captured 'we are all connected' in this beautiful shot of eldest, Carla (third from left) and her friends on their Communion Day!
Posted by Barbara Scully at 11:42 AM