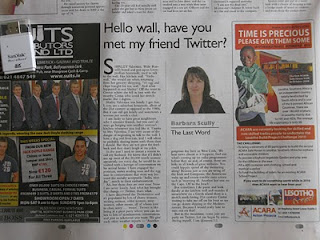 Shirley Valentine, Willy Russell’s bored and put upon Liverpudlian housewife, used to talk to her kitchen wall. “Hello wall,” she would say when returning from her grocery shopping, “it’s egg and chips tonight for tea, wall.” And what happened to our Shirley? Off she went to Greece where she fell in love with the swarthy Costas who loved her stretch marks. But I digress.

Shirley Valentine was lonely. I get that. I too am a suburban housewife, albeit of the 21st century as opposed to the 1980’s. But it can still get lonely and sometimes a woman just needs a chat. She needs to be able to vent frustrations, laugh with another soul who gets the joke or just pass the time of day.

I am lucky to have great neighbours who I consider friends, but you can’t always go barging into another woman’s kitchen whenever you feel like it. Thanks to Mrs Valentine I am very aware of the danger of beginning to talk to the wall. I have a dog and four cats and I will admit to probably sharing more with them than I should. But they are not great for feedback and they don’t laugh at my jokes.

In the past, when I felt I would die if I didn’t talk to someone, I used to invent a reason to call my husband. Sometimes I might get a few minutes chat out of him. He knew that if I didn’t use up most of the 20,000 words women apparently use every day, he would be assaulted with a barrage of conversation on arrival home. I have engaged the postman, meter reading man and the egg man in conversations that went way beyond the socially acceptable “hello, nice day”, much to their discomfort and embarrassment.

Ah, but those days are over now. Now I am never lonely. My husband has forgotten what its like to be hit over the head with a ton of unused words on his return from work and the postman, meter reading man and egg man are now quite relaxed coming to my door. And what has brought this change? Twitter, that’s what.

I have discovered the Twitterverse and it’s populated by lots of chatty women, writing women, older women, wise women, other moms, all of whom love to chat, sorry tweet. Twitter is like being at a great party where you can listen to lots of simultaneous conversations and join in whenever you wish to. We give each other weather reports – ‘it’s another lovely day here in West Cork’. We hear news almost as it happens, find out what’s coming up on radio programmes before they air and of course there are links to all kinds of great websites. You could happily spend all day twittering along. Because just as you are tiring of the Irish and Europeans, the Americans wake up and tweets tumble onto screen such as ‘morning all.. another hot one on the Cape, off to the beach.’

Ah yes, Twitter, where great women can witter on and on all day to their hearts content. But sometimes I do pause and look fondly at my kitchen wall and wonder if somewhere on a Greek Island is there a stretch mark loving 21st century Costas waiting to take me off on his boat so we can go skinny dipping in the Mediterranean. Because I would really hate to miss out on that! But in the meantime why not join the party on Twitter. Let me begin by introducing myself, I am @aurora111.
Posted by Barbara Scully at 11:27 AM