Yesterday, 6th March 2011 was my dear ole Dad's 10th anniversary. It's hard to believe he has been gone that long. But it was fitting that a story of mine in which he features was recently published in The Examiner newspaper. It is not online so I reproduce it below. I hope you enjoy it! 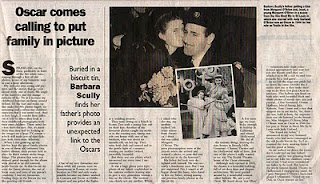 Sprawling on the floor, preferably in front of the fire while rummaging through a box of old photos is one of my favourite ways to pass a rainy afternoon. My kids also love seeing old pictures and the stories that go with almost every one of them. We laugh at the hairstyles and the strange fashions of the 70s, as I recount my childhood holidays on farms around Ireland. It’s the hair and make-up that make the 80s photos highly entertaining and confirm my children’s suspicion that I was never cool. And as they laugh, I wonder how different it will be in their future when they look at their childhood photographs with their own children. There won’t be a box that’s for sure. No, it’s more likely that they will be looking at the images on a large TV screen – which in fact will make out-of-date fashions look even more hilarious.

When I was growing up my mother kept the good family photos in one of those old fashioned fake leather albums, each picture held in place by black corner sticky hinge things. The photos that were not deemed good enough for the album were placed in an old battered Jacobs Biscuit Tin. In this biscuit tin were the funny photos, the out of focus ones, and ones of my parent’s courtship. As a child, I had my favourites. Finding them in the biscuit tin was like greeting old friends.

One of my very favourites was taken while my parents were on honeymoon in Rome, an exotic location in 1960 and only made possible because my father worked in Customs and Excise at Dublin Airport and was gifted the flights as a wedding present. The photo had the pair of them sitting on a bench in Rome Zoo with a young lion cub on their laps. Another of my favourite photos caught my mother in the evening sun, sitting outside our house with one of my brothers, who was about 6 months old, on her lap. They were both dark and tanned and in the gentle light of a summer evening my mother looked incredibly beautiful.

But there was one photo in the Jacobs Biscuit Tin which un-nerved me every time I uncovered it. It was a large glossy press type photo of my father, resplendent in his Customs uniform leaning over to give a very glamorous woman a kiss on the cheek. The woman was clearly not my mother. When I asked who she was, my mother replied “oh some actress from America. I think she was called Margaret O Brien. The press photographers were at the airport when she arrived and wanted a photo, so your dad was picked out to do the honours.” My father did look very delighted with himself. He was certainly a handsome man. But that was no excuse and I was not impressed. No, I wasn’t at all happy about this hussy, who dared to kiss my father, resting among our precious family photos in the biscuit tin.

A few years ago we were lucky enough to have a holiday in California and naturally visited Hollywood. We did all the touristy things, touring the stars homes in Beverly Hills, Grauman’s Chinese Theatre and the Hollywood walk of fame. But one of the places I really wanted to see was The Kodak Theatre, home of the annual Oscar Ceremony. Although only opened in 2002, the theatre is a beautiful building full of art deco lines and elegant architecture. We were guided around by a wonderful woman called Barbara. We saw a real Oscar. We heard about ‘seat fillers’ – volunteers who must come dressed appropriately and wait outside the theatre until they are whisked in to fill a seat vacated temporarily by a ‘real guest’. We also got to stand on the stage and gaze out over the auditorium while imagining what it might be like to stand there, gushing a speech of thanks on Oscar night.

As we left the stage our guide led us down the same corridor the movie stars use as they make their way to do their first post Oscar interviews. This hallway was lined on both sides with beautiful black and white photos of movie stars past and present....Clint Eastwood, Dustin Hoffman, Meryl Streep, Julia Roberts, Tom Cruise and a face that stopped me in my tracks. Yes, there she was, bold as brass, the imposter from our old battered Jacobs biscuit tin, Miss Margaret O Brien. Miss O Brien won an Oscar in 1944 for her part as Tootie in the movie ‘Meet Me In St Louis’ with Judy Garland.

“She kissed my father” I announced to my very bemused family who had never rummaged in the old Jacobs biscuit tin and had no idea what I was talking about. So I recounted the story for my clearly dubious audience, assuring them I had the proof at home.

As we walked on down the corridor I could feel my late father’s presence and he was grinning from ear to ear. Like my children’s opinion of me, I had never considered my father to be cool. But here in the world famous Kodak Theatre in Hollywood, I changed my mind. As I gave Margaret O’Brien a backward glance I whispered, ‘Good on you Dad, an Oscar winner no less’.
Posted by Barbara Scully at 4:17 PM