BE SPECIFIC ABOUT WHAT YOU WISH FOR 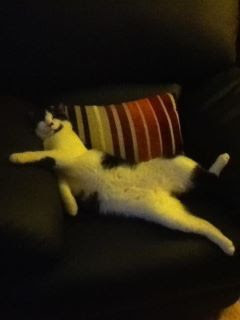 Do you believe in the power of prayer? Or as it is more trendily called lately – cosmic ordering? Do you think that our thoughts carry power? Can our minds influence our future?

It therefore goes without saying that my children think I am bats.. well except for the eldest one, now living in Perth, Western Australia where she is making her dreams come true. But my 13year old and my 11 year old definitely do not value my wisdom at all and much to my delight consider me an awful embarrassment. Although recently the universe (or God or whatever) decided to show my 13 year old how visualisation and prayer or cosmic ordering works with amazing results. And I think it might have changed her mind.

Regular readers will remember that over the summer and autumn we fostered kittens for the DSPCA. It was hard work and great fun. The last fostering we did was a mammy cat and her 4 black kittens. 13 year old fell in love with one who she was convinced loved her. “He sits on my lap and he loves me” she reported regularly, followed by “can we keep him, pleeeeease”. Now we already have four resident cats – which is loads, so my standard response to her plaintiff cries was “no, we are not going to be a five cat household”.

But she went on and on and on... for weeks, for months. Her argument was that none of our resident cats loved her specifically. Kitty (our youngest cat) loves the 11 year old, basically sharing her bedroom day and night. I stood my ground.

But one evening at dinner, when I must have been in a particularly mellow mood, she quietly once again made her case for getting her own cat. She described how he would be a gentle, playful cat, black and white and he would love her. She had that distant look in her eyes as she daydreamed about her imaginary cat.

“Listen” I said, putting down my knife and fork, “if this is really important to you and something you really want, just carry on visualising it. In your mind see exactly what your cat looks like, see him sleeping on your bed and sitting on your knee.”

“But Mom, you said that we can’t have more than four cats so how would we get this new cat?”

“You don’t worry about that at all. Leave all the details to God. You just put your wish to have a cat to call your own out there and then forget about it.”

She looked at me dubiously but she did shut up. We had about ten days free of her moaning about getting a new cat.

Then one afternoon I was coming home town when my phone rang. It was the girls excitedly telling me that a stray cat had appeared in the front garden and wouldn’t go away. This happens occasionally with dogs and cats but usually an owner is found pretty quickly. “Can we let him in the house, it’s really cold out” they implored. “No way” was my answer, with visions of how quickly our house could be destroyed by fighting cats and our dog thrown into the mix for good measure. I told them they could give him some food in the garden but that was it.

When I pulled up in the driveway about half an hour later, there he was. A black and white young cat sitting on the window sill as if waiting for me to arrive. I addressed him immediately “you needn’t get any ideas buster... you are going home”. He looked very like a neighbour’s cat. Girls were dispatched to check that out. But no, he wasn’t theirs. By now it was dark and it was very cold and cat had stubbornly stayed by our front door. “Ok, I said we will let him in carefully and see what happens.”

Amazingly nothing much happened. The other cats were mildly curious but not that bothered. Dylan our daft dog got madly over excited like he does about everything but even that was short lived. So cat was allowed to stay the night. He found one of our cat beds under a radiator and slept for hours.

Next morning common sense was again employed. “We must find his owners” I lectured the girls. “We will drive around to see if there are any notices up on nearby estates and then we will take him to the vet to see if he is micro chipped.” There were no notices and there was no micro chip. The vet confirmed that he was about a year old, intact (not been spayed) and in good condition.

“He belongs to someone,” the vet said “I think you should let him out and he may just go home.”

This seemed like sage advice which we followed. Cat immediately set off at a stately pace down the road. “See”, I said to 13 year old “he has remembered where he lives and he has gone home. Somewhere his family will be very happy to see him.”

On Monday in the early afternoon I got a call from the vets.

“You don’t still have that black and white cat do you” she asked.

“No”, I said proudly “we took your advice, let him out and off he went. I presume he’s gone home.”

“Em, no he didn’t. He was picked up yesterday by a lady who found him on the central reservation of the N11. She couldn’t keep him, he’s back here."

At 4pm that day I picked up 13 year old from school and instead of driving home, headed for the vets. When we pulled up outside, she looked at me quizzically.

“There is someone here waiting for you,” I said.

Sometimes I can be a bit slow on the uptake, even with my own wisdom. The universe had sent my 13 year old her cat, exactly as she had visualised; black and white and full of personality and affection. And yes, he does love her. He sits on her knee and sleeps on her bed. Most of all though he knows that he is where he is meant to be.

So now – I want a weekly newspaper column; one where I can write about anything that tickles my fancy or moves me or annoys me. I also want a regular radio gig....reviewing the morning’s newspapers where I could focus on the positive and off beat stories to help cheer us all up?

Right – got that Universe? Watch this space!!!

Photo of Felix relaxing (yep, he does sleep that way sometimes) by 11year old!