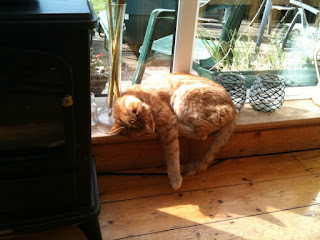 In this part of the world, cats were big news last week. Yep, domestic moggies made the headlines. For the benefit of the Americans, let me explain. The first story came from the UK where a woman put a cat in a wheelie bin. She was caught on CCTV and later apologised. However she qualified her apology by saying "it was only a cat". The second story concerned a moggie from Malahide in North Dublin who decided to board the DART (rapid transit system) at her local station and travelled into the city. There was taken into the care of the DART staff who tweeted her story and her family were located and a renunion was arranged.
But back to our lady in the UK - "only a cat" she said. As if there was such a thing as "only a cat." Cats are sublime creatures. I know. I have shared my life with cats since the day I was born, quiet some time ago. The cat heritage comes down my maternal line. My mother always lived with cats; I must find out if my maternal grandmother did too.
Anyway the point is, I know cats. I understand them. And they are magnificent creatures. I don't know who it was that said "I have lived with many Zen Masters, all of them cats" but he was bang on the money. I currently share my home with four felines, some more Zen than others. But each one of them contributes to a laid back, informal, comfy energy in my home, that I could not achieve alone. Sure they also contribute to cat hairs everywhere but so what. If they could talk, they would say "chill out, its hair. It don't stain"
My cats desport themselves all over my house. Each has their own favourite spot. In the morning they find puddles of sunlight to recline in and as the sun dissappears they seek out the heat of radiators and hidden pipes. One in particular likes the Hot Press. The lend the whole house an air of languid uselessness in a way that no scented candle or soft music could ever do.
Often I explode in the front door, laden down with bags, harrassed and mithered, only to be met by the sight of Fat Cat stretched out on the hall chair, catching the sunlight. He opens just one eye to acknowledge my presence. Above his head is a giant thought bubble which says "what's the fuss? Chill woman!" in a voice reminiscent of the old Caramel Bunny. Then he drifts off back to cat dreamland and I arrive into the kitchen wondering which of us is the more evolved species.
But it only an inexperienced cat woman who thinks that cats sleep all day. Sure they sleep a lot but cats have another habit which occupies many hours in the day. That's looking out the window. They ponder the weather and also take huge interest in the neighbours movements. What are they thinking about as they gaze out the window, I wonder.
Cats are mysterious creatures. They live in two worlds. This one and the other world -the unseen world whose energies they pick up regularly. Ever seen a cat staring at a stop high up on a wall or on the ceiling. They are in touch with things we only imagine. They are endlessly curious, as demonstrated by the Malahide Moggie on the DART. We also had an adventurer. Tiger, our matriarch cat, took off when she was in her teenage years and was gone for 3 months. We had her dead and buried when one day she wandered back into the kitchen, not much the worse for wear for her expedition.
But the very best thing about living with cats is that point when you gain their affection. Unlike dogs, whose love can easily be bought, cats are aloof and independent. So that when they decide they like you, it is the most precious and wonderful gift. Once you obtain the love of your cat, you have a friend for life. A soft, warm, wise and comforting cat. "Only a cat" indeed, as if there was such a thing!
Posted by Barbara Scully at 5:55 PM

Email ThisBlogThis!Share to TwitterShare to FacebookShare to Pinterest
Labels: cat in a wheelie bin, cat on the DART, cats