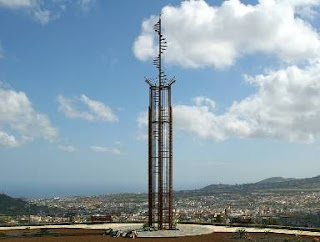 Last night Channel 4 screened a horrifically mesmerising programme called Plane Crash in which a team of scientists flew an ultimately empty 727 airliner to a desert site in Mexico where it was deliberately crashed in order to retrieve data from many sensors, cameras, computers and high tech crash test dummies onboard.

A worthy exercise which was turned into entertainment by the adding of an interactive element.  We, the viewers could log onto the website and check in for this flight.  We could choose our own seat and later we would find out if we were likely to have survived the crash or not.

It was, as I said, mesmerising.  The aircraft crashed and it turned out that most of us (except for those who plumped for First Class) did ultimately survive.  But I did feel very uneasy afterwards as the scientists investigated the wreckage.

An air crash although a rare occurance must be beyond horrific.  Let me tell you a story.....


At 1.15pm on Sunday 27th March 1977 a bomb exploded in the florist shop in Las Palmas Airport in the Canary Islands.  A warning had been given and no-one was killed, although eight people were injured, some seriously.  A follow up phone call from the group responsible hinted that there may be another bomb, leaving the airport authorities with no option but to evacuate the building and temporarily close the airport.  Incoming flights were diverted to the nearby island of Tenerife.

35 years ago Los Rodeos was Tenerife’s only airport.  It was a sleepy place which was built in the mid 1940s and it still carried the echo of those days when flying was glamorous and romantic.  But although Los Rodeos gave the impression of an airport lost in the mists of time, it was also regularly shrouded in the mist that descended from the nearby Mount Teide.  Mount Teide is Spain’s highest mountain and dominates the scenery on the island.  Usually snow covered, it presence gives the island almost two different climates.  The south is dry and barren and gets the best of the weather with plenty of sunshine and little rain.  The north however is wetter and misty days are not unusual giving a very different environment which is both lush and tropical.

The 27th of March 1977 was just such a misty, damp day at Los Rodeos when KLM flight 4805 made its final approach.  Like most of the other aircraft on the apron at Los Rodeos that day, the KLM flight, which was a holiday charter for Holland International Travel Group, was en route to Las Palmas.  Onboard the giant 747 were 234 passengers (including 3 babies and 48 children), all no doubt looking forward to a sunny holiday on the island of Gran Canaria.  On arrival, they disembarked the aircraft and stretched their legs in the now crowded terminal building.

About a half an hour later, another fully loaded 747, Pan Am flight 736 arrived through the mist.  This flight had originated in Los Angeles via New York and onboard were 378 passengers, mostly of retirement age.  They were also headed for Las Palmas where they were to connect with Royal Cruise Line’s ship, Golden Odyssey for a 12 day cruise.  By the time they arrived for this unscheduled stop in Tenerife they had been onboard the aircraft for 13 hours.  As the terminal was now full, they were not given the option of disembarking although the doors were opened.

At about 3pm Las Palmas airport reopened.  At Los Rodeos the apron and taxi-ways were full of aircraft and so the controllers on duty began the job of getting everyone airborne again.  As the Pan Am passengers had not left the aircraft, their flight was ready to go but because it was parked behind the KLM 747 they were dependent on the Dutch aircraft leaving first.  Along with re-boarding the passengers the KLM captain decided to refuel, probably in an effort to save time in Las Palmas.  He was keenly aware that his crew were in danger of running out of flying hours which would prevent them from flying back to Amsterdam on the return leg of the journey.  There was nothing the Pan Am flight could do except to wait behind him.  It was about 5pm by the time the KLM aircraft began to taxi.

By now the runway was covered in thick fog.   The KLM aircraft was to taxi to the end of the runway for a turnaround in preparation for takeoff.  The Pan Am began taxiing behind him and was instructed to leave the runway at taxiway no 3.

The KLM flight began its take off.  The Pan Am aircraft was still on the runway, not having yet come to taxi way 3.  The thick fog had significantly reduced visibility so that by the time the KLM captain saw the other aircraft he was committed to take off.  He tried to climb quickly and the Pan Am tried to move off the runway onto the grass.  It was too little and it was too late.

A total of 583 people lost their lives on that damp spring day at Los Rodeos airport.  The crash is still the world’s worst aviation disaster (aside from 9/11).  There were 61 survivors from the Pan Am aircraft (although 9 died later of their injuries) and just one from the KLM, a holiday rep who ultimate destination was Tenerife anyway and so never re-boarded the flight.

Although the air accident report placed the blame fairly squarely on KLM Captain Van Zanten’s shoulders for taking off before being given ATC clearance to do so, like most aviation disasters, there were numerous factors which all played a part in the crash.  The bomb at Las Palmas, the fact that it was a Sunday and only two air traffic controllers were on duty at Los Rodeos, the number of aircraft which were suddenly diverted to this small airport, and the fog all conspired against those whose lives were lost.

After the disaster in 1977, a new airport Aeropuerto Reina Sofia was opened in the south of the island, leaving Los Rodeos to handle the inter-island flights and flights from the Spanish mainland.

I spent many blissfully happy times in Tenerife in the early 1980s.  I regularly flew in and out of Los Rodeos Airport as it was nearer to my destination of Puerto de la Cruz.   It was small, intimate airport completely devoid of the hustle and bustle one normally associates with an airport terminal.  I haven’t been there recently but know that the airport has been significantly extended and upgraded and is again handling international flights.

But Los Rodeos airport, on the foothills of the majestic Mount Teide remains in my memory as the relaxed, informal, welcoming terminal it was all those years ago.  However I never passed through it without thinking about how it was also the scene of such unimaginable horror which began to unfold just after 5pm on 27th March 1977. 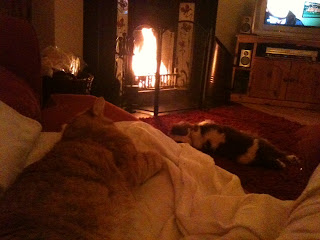 "I'm so glad I live in a world where there are Octobers.”
― L.M. Montgomery, Anne of Green Gables

Autumn seems to be a little later than usual in arriving this year.  Here we are in the second week of October and I wonder, can you feel it yet?

I am just beginning to sense it.... that delicious feeling of the earth slowing.  Of Mother Nature settling down and preparing for the deep slumbers of winter.  Her message is carried on the damp night air but it emanates from deep within.... deep within the earth and deep within our own psyche.

The natural world provides us with sensual cornucopia.....
the smell of woodsmoke,
the sound of crunching leaves underfoot,
the sight of the trees wearing their warm tones of russet and golden leaves,
the touch of misty mornings,
the feeling of energy being drawn inward.

Mother Nature whispers her message to our deepest selves.  She tells us that now is time to take stock, to pause, to be gentle with ourselves and others.  It is preparation for spiritual and psychological hibernation.   It is time for reflection and remembrance.  A time for gratitude and for nurturing.

It is simply my very favourite season...... and I fully intend to do as nature intends us to do... relax, reflect and recharge.

“Delicious autumn! My very soul is wedded to it, and if I were a bird I would fly about the earth seeking the successive autumns.”
― George Eliot

HANDS OFF OUR CHILD BENEFIT

One of the few ‘right’ things we did as a country during the boom years was to take a few steps towards valuing, in a real way, the work of caring for children in this country.

Back in 1992 debate began around the provision of childcare in Ireland for families where both parents worked.  The Commission for the Status of Women recommended that there should be a tax relief for the payment of childcare for working parents.  However that immediately led to parents who cared for their own children in the home feeling (rightly) discriminated against.

By 2000 we were also discussing child poverty and in the end it was felt that an increase in the universal child benefit scheme was the best way of addressing all of these concerns.

So parents in Ireland although not getting tax relief for childcare were paid what looks like a generous children’s allowance which could offset some of the cost of childcare while equally recognising the work of the army, of mainly women, who stay at home to care for their children themselves.  This seems to have been somewhat forgotten about although an excellent opinion piece by Evelyn Mahon intoday’s Irish Times goes some way to correcting our absentmindedness on the subject.

We all are familiar with that old cliché that we live in a society not an economy.  This is one area where that cliché is worth fighting for.

Regularly we talk of how we lost ourselves completely in the excesses of Celtic Tiger Ireland; we got ideas above our station and lost our values completely.  Some of that may be true but in the midst of all the material madness we did one right thing.  We said that the work of caring for children has a value.  We recognised that value and we went a little way towards compensating the carers for that work.

That work has lost none of its intrinsic value.  Children are our future and our country’s greatest asset.

Almost a century ago the Proclamation of the Irish Republic stated this new Republic’s aim of “cherishing all the children of the nation equally.”  We are only now getting around to beginning doing something about that as we prepare to amend our Constitution to include children’s rights.

Isn’t it then ironic that at the very same time our Government are considering once again taking away the only value that has ever been given to the work of caring for children?  Talking out of both sides of their mouth?

Well hear this Minister Burton – Get Your Hands Off Our Children’s Allowance.  Let’s shout it loud and clear.  Our children are depending on us.

If you want your voice heard you could start by signing this petition
http://www.causes.com/causes/795632-don-t-touch-our-child-benefit-irish-government?utm_campaign=home